This page brought to you by the book FreeWheeling Easy in Western Pennsylvania. It cover 29 trail northeast of Pittsburgh. Order the book pymatuning

On the east side of Pymatuning State Park in Crawford County

Pymatuning Lake makes a great crescent in the headwaters of the Shenango River, straddling Crawford County in Pennsylva­nia and Ashtabula County in Ohio. The Erie & Pittsburgh Branch of the Penn Central RR once cut a smaller arc between the tips of the lake. Much of that railbed has been swallowed by adjacent back yards and other uses, but a few miles at each tip remain open for trail users. Unfortunately, the two sections are about ten miles apart. Both sections are most conveniently accessed from parking areas at their midway points. We’ll describe each section end-to-end for simplicity.

Trailheads near dam at south tip, along causeway at north tip

Usage restrictions No motorized vehicles; snowmobiles in season; no horses

The southern section runs from Jamestown on the south to an area of private homes on the eastern shore of Pymatuning Lake. In Jamestown it starts inconspicuously on Main St about half a block north of the Golden Dawn food store. For a few blocks it runs be­hind residential back yards. After the second road crossing the surface gets rough for a tenth of a mile; you can avoid this by using adjacent Water St. If you re-enter the trail at a “no motor vehicle” sign, you will have a quarter mile of narrow double-track to Headley Field, a baseball field. Alternatively, you can follow Water Street until it ends in the parking lot for Headley Field, and rejoin the trail at the far end of the lot. The
trail now becomes packed cinders in young growth woods, but with some depressions that hold water. In another tenth of a mile the trail crosses a road near the Jamestown Area Ele­mentary School and enters an embankment looking down on houses. The ground gradually rises, and after a mile the trail is in a 40’ tree-shaded cut. It crosses under the road to Pymatuning Dam with steep trails providing access.

After the underpass, the ground quickly drops away again, and a quarter-mile later you emerge at the lake itself for a complete change of scenery. The trail is now on a small embankment, with lake to the west and wetlands to the east. You have a good chance of seeing lake birds here, especially ducks and gulls with perhaps a heron. This continues for three-quarters of a mile, interrupted briefly by a stretch with woods on the lake side and back yards on the land side. Too soon, the lake shore swings away from the trail and the tread disappears into residential back yards, a total of about two and three quarters miles from Jamestown.

The northern section of the trail runs from Fries Rd to the fish hatchery at the north end of the causeway. On the south side of Fries Rd the rail grade is posted against entry. To the north of Fries Rd the trail begins in open woods and quickly emerges on an embankment that separates a small pond at the mouth of Bennett Run from the main lake. The trail surface is grass growing through coarse cinders and small gravel. Aside from some shrubbery on both sides, you get great views across the lake and the pond. You’re likely to see feeding birds, especially ducks, gulls, and herons, on the pond and sailboats on the lake. Some of the best views are half a mile from the road, where a bridge crosses the inlet connecting the pond and the lake. Three quarters of a mile from Fries road the trail passes the parking lot for boat access. Here the trail starts to parallel the road on the causeway, separated from the road only by a drainage ditch. The trail continues across the causeway as grass and cinders. It effectively ends at the fish hatchery at the end of the causeway, a total of 2.6 miles. The rail grade continues toward Linesville, but there doesn’t appear to be good trail access in Linesville.

Midway on the causeway you can stop at the spillway to see one of western Pennsyl­vania’s most peculiar tourist attractions, the fish feeding area at the spillway. People feed the fish and ducks so regularly that the fish are jammed in gill-to-gill and the ducks walk on the backs of the fish to compete for the food

At the end of the 19th century, the state of Pennsylvania began looking into ways to reclaim the Pymatuning area swamplands. The Pymatuning Act of 1913 enabled the project, and the state acquired land for the lake in the 1920’s. Pymatuning Dam was completed in 1934. The dam’s primary purpose is conservation of waters entering Pymatuning Swamp, and it also regulates water flow for the Shenango and Beaver Rivers. As a secondary purpose, it also provides flood control and recreation.

Pymatuning Lake is a vacation destination featuring fishing, sailing, camping, and sightseeing. The Linesville causeway features fish feeding at the spillway, a wildlife museum at the visitor center, and a live fish viewing tank at the PA Fish and Boat Commission visitor center. Nearby Conneaut Outlet Swamp attracts migratory birds. 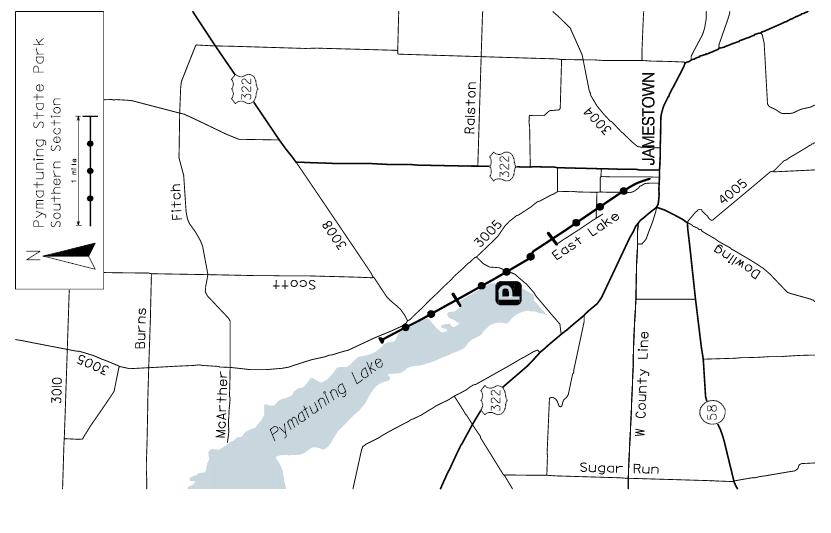 Extensions of the ride

At the southern tip of the lake, you can cross the dam to an extensive network of paved and gravel roads between West Lake Rd and the lake. Although these roads are open to traffic, the speed limit is 25 mph. These roads reach rest rooms, picnic areas, the swim­ming beach, and the park restaurant.

Vicinity: Directions begin entering Jamestown from the east on PA58. To reach this point from Pittsburgh, go north on I79, then west one exit on I80, north to Mercer on US19, and northwest on PA58 through Greenville to Jamestown.

Pymatuning Dam (southern) trailhead: In Jamestown, follow signs for East Side, Pyma­tuning State Park. These will lead you north (right) on East Lake Rd. In about 2 miles, turn left toward the dam. In 0.3 miles, just after crossing the bridge over the trail, turn right into a large parking lot. To reach the trail from this lot, go back out to the road, cross the road, and look for the moderately steep trail down to the trail; there’s one of these on each side of the bridge. This point is near the middle of the trail, so you can go either direction from here. Jamestown is in the direction away from the parking lot.

Pymatuning Causeway (northern) trailhead: In Jamestown, follow signs for East Side, Pymatuning State Park. These will lead you north (right) on East Lake Rd. In about 11 miles, at a “T” intersection, turn left. Look for a parking lot and boat launch on the left just before starting across the causeway. Park here or at the spillway parking area 0.5 mile later. This lot is near the middle of the trail, so you can go either way from here.

Swimming, fishing: It’s a state park, so you may swim only at official swimming beaches, which are open from Memorial Day to Labor Day and possibly at other times (check with park office). Official beaches are at Linesville, Tuttle Point, and west of Jamestown, all 2-3 miles west of the trail on lightly trafficked roads. Fishing in lake and from shore for walleye, muskellunge, carp, crappies, bass, and many others.

Text version from 2002 edition. Conditions will have changed; you are responsible for your own safety. Oldest segment check 1/1990.